Built to watch over my fledgling food forest in West Wales, this Weather Bot was supposed to be a small side project. Combining my computer & software building skills with my new permaculture intent made a lot of sense; this was the beginning of me trying to live like a techno-peasant.

I built the weather bot on the side, in a month or two - a fully solar-powered, standalone tree-watching sentinel. I stood this up in the field in January 2016, and for the past two years it has watched over the trees.

While I learned a lot building this weather station, it wasn't a categoric success. I've got a chunk of sensor readings, and photographs, but sadly there was a glitch in the power supply, (or software), and so most of the data has been corrupted.

The biggest lesson here is that while we can build cool stuff on the side, we should sometimes double down on our central project. 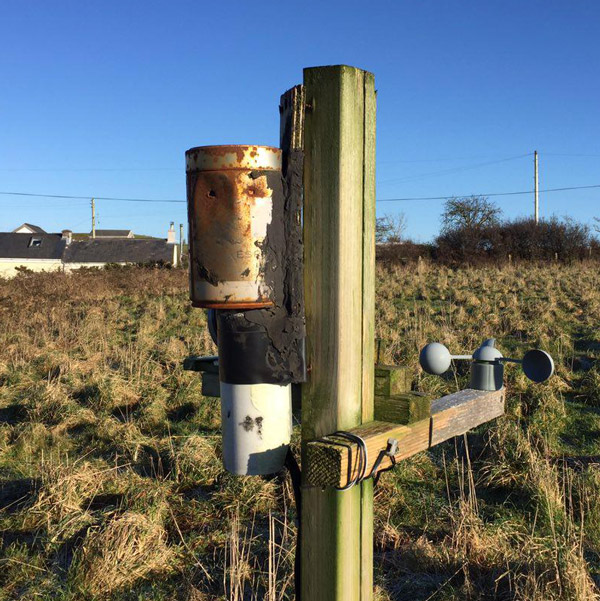 Two years in the field: The coffee-can weather station just before I took it down

I found permaculture and agro-forestry because I was looking for a way to add value to my world. Clearly there is much environmental damage being done, and so I decided to do what I could to offset (at least) any of the damage I was responsible for. I envisaged using my computer/software skills to super-charge a food forest project. And it kind of worked.

I wanted to build a weather station which also took time-lapse photographs over a meaningful period of time.

I was to plant my food forest in a field at my dad’s smallholding in West Wales. We knew the field got cold, but we didn’t know how cold. Being Wales, it also rains, a lot, and has friendly winds of 80MPH+.

To me, it was a big deal to plant 150 trees, and I wanted to explore how technology could assist, or at least record, that process.

Initially I looked for simple paid-for solutions. But the reality then, was that there was patchy & expensive weather stations, or short-term (few day) time-lapse hardware, but nothing which would do most of this stuff out of the box. I’m not sure that’s even changed yet, but surely someone will put this all together on kickstarter/similar.

I knew a bit about Raspberry Pi’s and new linux from my work as a web programmer. And as the available sensors and camera quality improved for the Pi, it became obvious that that was the way to go.

I saw that the Raspberry Pi model B v1.1 would work best due to it’s power consumption, and decided that I’d stick it in an Illy coffee can, partly as a space challenge. A 64gb SD card could store about 37,000 images at decent resolution, (which would be every 10 minutes for most light hours, for a year!)

I spent about a month finding the right sensors, and wiring them all up. Thanks to the wonderful work of many hackers and hobbyists, it’s fairly easy to add thermometers, light sensors, humidity sensors and such to a Pi. The wind-sensor (aenometer) was the only sensor which needed special effort…

Aenometer attachments for Raspberry Pi’s were expensive, but I purchased a replacement aenometer head from Maplin for Ł2.49. This sent out pulses on each spin, which could be read by the Pi. From these we roughly calibrated the setup by attaching it to the back of my car, and getting my brother to run a few bash scripts from a laptop as I drove steadily at specific speeds.

Power was my last issue, as the field was a good 200m from any power-point, and wiring it in seemed unrealistic. Finally I resolved to invest in an 80w solar panel and a boat battery. I used an add-on board for the Pi to mediate with this system, as well as to allow me to log the state of the battery.

Extras: In the end I mounted a waterproof box on the pole, which housed remote on/off and reset buttons for the Pi, as well as led’s to indicate status.

Once in the field, secured and wired into the power system, this forest sentinel did its job diligently…. for the first few months. After this it seemed to develop a habit of turning itself off at odd times (according to the logs). This repeated until it eventually corrupted much of the useful data (though I had been taking backups as often as I could).

The Illy coffee can held up, and seemed to still be water-tight after 2 years in a wet Welsh field (even with the little camera hole).

The wiring loom, and extra ‘access box’, held up to the weather, though in honesty I rarely turned off the Pi via the access box, because unscrewing 4 screws in the sheet rain isn’t that fun.

A fun project, and I hope to build a v2, or that someone with more time will solidly solve the challenges for a fair price. I can imagine a network of these, interacting across a forest garden, dumping data to the cloud via 4G/5G++ and making some amazing video & time lapse photography possible, (and logging air-quality data, too).

Photographs – After 2 years in the field: